An old sailor’s almanac from Amsterdam 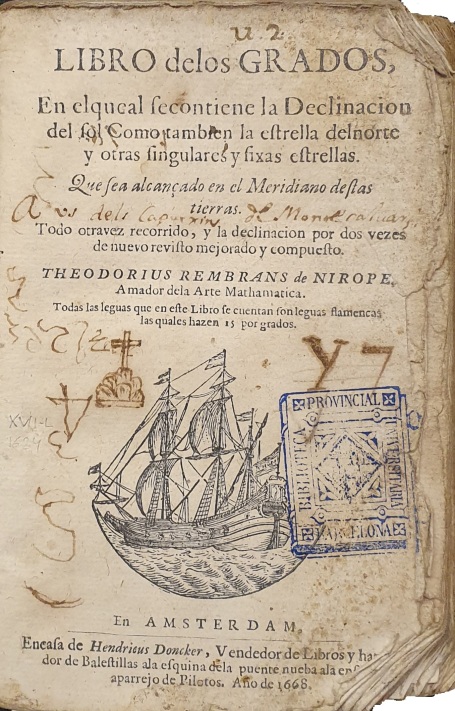 Thanks to the advice of my colleague Astrid Balsem, curator at Allard Pierson in Amsterdam, I was able to visit the CRAI Biblioteca de Reserva in Barcelona during the last week of May 2019. I stayed there in the context of an Erasmus+ exchange with Bart Jaski, curator at the University Library of Utrecht. Neus Verger, Gemma Caballer and Marina Ruiz showed us the rich collections (more than 120,000 editions printed between 1501 and 1820, 1240 incunables and 2150 manuscripts!), explained several projects and activities the library carries out and helped us to find our way through the elaborate databases. Worth mentioning is that along with the old print catalogue, which contains extensive bibliographic descriptions, separate databases for provenance, decorative paper and printer’s marks are available. Reproductions of the material are often included. Every book therefore receives an in-depth analysis.

The old print catalogue is easily searchable. With a push of the button, all publications from a specific country or city appear on the screen. For example, we quickly knew that around 900 descriptions of Dutch old printed books were entered. They are usually written in the Latin or French language, occasionally in Spanish or Catalan. Of the 477 books printed in Amsterdam, I couldn’t find some 60 in the national bibliography of The Netherlands. Mostly they concern the umpteenth edition of a certain text, but that was not the case with a small sailor’s almanac, Libro de los grados, printed in Amsterdam by Henricus Doncker in 1668.

Libro de los grados is a Spanish translation of Dubbelt Nierper graedt-boeck written by the Dutch astronomer, mathematician and teacher Dirck Rembrantsz van Nierop (1610-1682). He was much praised in his time, as the Dutch poem on his tombstone in the Reformed Church in Nieuwe Niedorp shows. He was portrayed as a clever (‘schrander’) man, whose fame will never perish (‘syn glorie nooit verdooft’):

He wrote the astronomical almanac for sailors, so that they could determine their location on earth and the hour of the day. The almanac contains tables for the period 1668 to 1679. The calculations are based on the meridian of Amsterdam. When the prime meridian was not yet established worldwide, many sailors had their own prime meridian based on the port of departure. The woodcuts are the same as in Dutch editions, of which there are many by various printers. Libros de los grados (1668) is, however, the only known edition of Van Nierop’s almanac in the Spanish language. Only three copies have survived (Barcelona, Madrid, Providence USA). 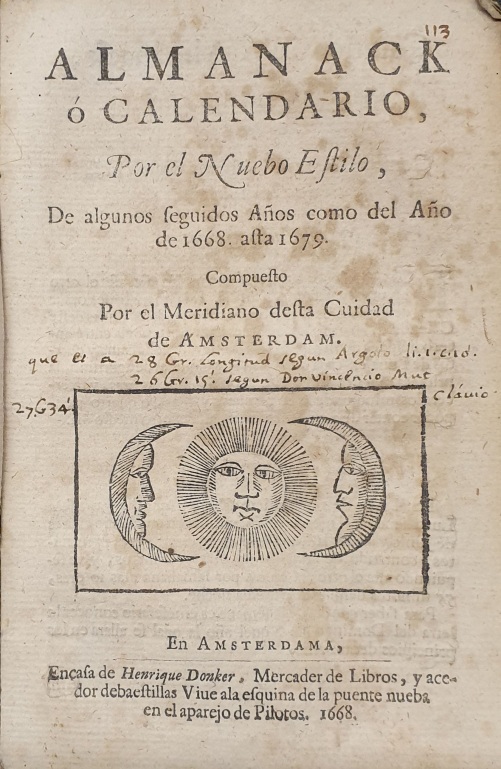 The copy in the CRAI Biblioteca de Reserva belonged to a former monastery in the area, like most old books in the library. In the catalogue description you can click on the name of the monastery – in this case the Capuchin friars in Mont Calvari in Barcelona – and you will find other books of the same owner. On the title-page of one of the almanac volumes a friar left an inscription. Bart Jaski noticed it concerns the longitude of Amsterdam according to the Italian scholar Andrea Argoli. A copy of his astronomical tables in an edition of 1638 belonged to the convent of Mont Calvari as well. Furthermore the inscription refers to Don Vincencio Juan de Lastanosa, Gerhard Mut and the Jesuit mathematician Christoph Clavius. This friar knew his literature!

The separate provenance database of the CRAI Biblioteca de Reserva provides historical information and images of inscriptions. We read that the convent of Mont Calvari, situated not far from the sea just outside the Barri Gòtic in nowadays Eixample, was destroyed during the 1697 siege of Barcelona and rebuilt elsewhere in 1723 as the convent of Santa Madrona. This means that the almanac must have been the property of the Capuchin friars prior to 1697. Did they purchase the book themselves or was it left behind by sailors? Perhaps the latter, because the parchment cover looks rather damaged by moisture.

Gwendolyn Verbraak, Allard Pierson, The Collections of the University of Amsterdam